Indonesia is determined to open its doors to Chinese investments and significantly strengthen bilateral economic ties, even as it seeks clarity on China's vision of a Maritime Silk Road, President Joko Widodo said.

In an interview with the South China Morning Post ahead of his state visit to Beijing today , he said it was time for his country to get serious about deepening bilateral trade, investment and infrastructure links.

The Indonesian leader identified toll roads, railways, power plants and ports in his country as possible projects for Chinese and Indonesian state-owned and private companies to embark on.

"We want to focus specifically on infrastructure and manufacturing developments," he added.

He meets President Xi Jinping tomorrow. Widodo said he wanted to ask Xi for more details on the president's Maritime Silk Road vision before he could decide to endorse it.

The two leaders are expected to sign a memorandum of understanding to boost ties in several key areas. It is understood that a power plant project - Indonesia's electricity demand grows 9 per cent annually, higher than capacity growth - could be agreed upon this time. 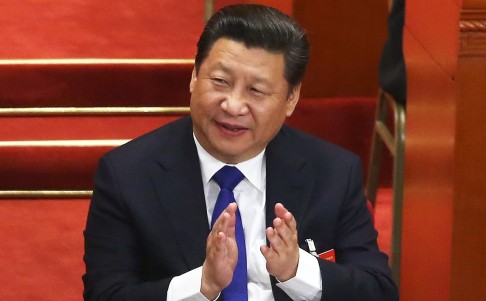 Xi Jinping (pictured) meets Widodo tomorrow in Beijing. Photo: EPAWidodo said that his state enterprises minister, Rini Soemarno, had held two rounds of meetings attended by the state-owned companies of both sides to work out joint projects. She went to Beijing, Shanghai and Shenzen to prepare the groundwork to seal some deals this week.

He also hinted at his frustrations with his domestic challenges in trying to pave the way for foreign - especially Chinese - investment.

"I hope when I go to China on this trip, we have direct implementation. I don't want to only sign and sign documents and then there is no implementation," he said.

While China ranks as one of the top investors in many countries in the region, its direct investments in Indonesia have been anaemic, in 13th place, after the Netherlands, Mauritius and Taiwan.

He said he had opened a one-stop national office to slash red tape and introduced new regulations to simplify land acquisition.

The Silk Road idea was first mooted by Xi in 2013 when he toured Southeast Asia, and is widely viewed as a response to the "Asia pivot" policy of the United States, as it calls for closer maritime and economic links. 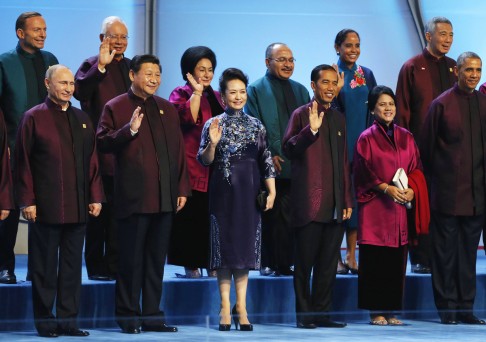 Widodo (front third right) first met Xi (front second left) at the Asia-Pacific Economic Cooperation (Apec) summit in Beijing in November. Photo: ReutersMeanwhile, Widodo has laid out his own strategy called the "global maritime axis", a key plank of his campaign when he ran for the presidency in July last year.

He has pledged that Indonesia - the world's largest archipelagic state - will develop its marine resources and bolster maritime defence.

Widodo, who is called Jokowi at home, declined to be drawn into saying whether Xi's Maritime Silk Road idea would compete with or complement his plans because "there is no detailed information".

His foreign policy adviser, Rizal Sukma, told the Post that, from what Indonesia knew, Xi's idea was for economic and diplomatic ties, adding: "It should not be about hegemony. As long as they follow that framework, we would be more than happy to work together."

The Post has learned that behind the scenes, officials on both sides have begun discussing how Widodo's doctrine could complement the Maritime Silk Road vision, with the building of ports and toll roads as concrete forms of engagement.

Such an approach would dovetail with the project proposals Widodo has said he will present to Xi during their talks.

Appearing relaxed during the interview at the presidential palace in Jakarta last week, he said he looked forward to his second round of talks with Xi.

He said Indonesia was ready to propose four locations on the island of Sumatra and three on Kalimantan where ports could be jointly developed.

"The last time we talked about investment and trade but we didn't know, for example, the locations, like how many and which ports and deep sea ports we want to build."

Asked how he viewed China and Xi, he replied that he was impressed at the speed with which China had made progress over the past few decades.

Tom Lembong, his economics adviser, said trade flows and direct investments should be much higher given China is the world's second-largest economy and Indonesia is Southeast Asia's biggest economy.

He was hopeful big, impactful items could be agreed upon this time. "Then we could be planting some important seeds here," he added.