KONFRONTASI -  Shiyes is the name of a small train station on Russia’s Northern Railway, located some 1,200 kilometers north-east of Moscow. It used to be the site of a logging camp that was officially shut down in 1974. A few people stayed on, until the very last resident packed up and left in 2002.

Muscovites probably consider the area to be completely uninhabited, but that is not the case. People in the neighboring towns and villages live off the land: They hunt, fish, and gather mushrooms and berries. Some do it for pleasure, others for survival. Several rickety hunters’ shacks dot the taiga around Shiyes.

In July 2018, two hunters from a nearby town called Urdoma stumbled across a construction site in the area. The workers at the site told the hunters that they were building an enormous landfill designed for shipments of garbage from Moscow. They advised the hunters to move away from the area and to take their children with them. 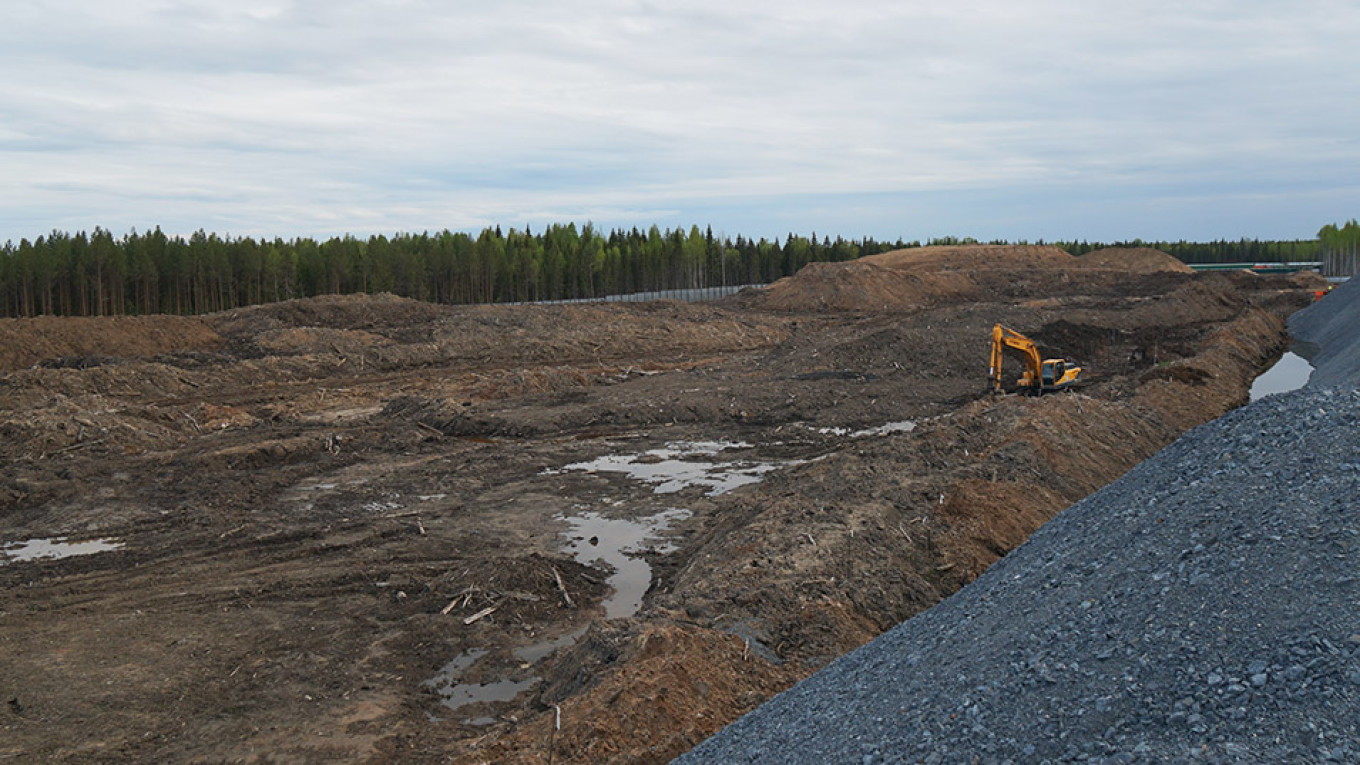 After hearing the news, Urdoma residents began to send inquiries to various government bodies about the construction site, and even filed a complaint with the police that questioned the legality of the project. By August, a protest against the landfill drew an estimated 1,500 people in Urdoma, or one-third of the town’s population.

‘The dump of death’

Shiyes is seated on a marshy highland from which nearly 150 streams flow into rivers that feed the White Sea and the waters of the Baltic region. Winters here are long and harsh with frequent snowstorms, while heavy rainfall comes with the change in the seasons. Hot and dry weather rarely lasts for more than two or three weeks in the summer.

“Moscow’s government is planning to grind up the capital’s unsorted trash, compress it, wrap it in polyethylene and store it here,” said Nina Ananina, the chairperson of the Ecologists of Komi NGO. “The shipments will include highly hazardous waste and food that will decompose without oxygen and will emit toxic gases such as hydrogen sulfide and methane.”

Ananina predicts that the released gases will poison the atmosphere for many kilometers in all directions and that toxic filtrates will enter the regions’ water supply. The inhabitants of the nearby villages of Madmas and Urdoma will be the first to suffer, followed by the 250,000 residents of Syktyvkar, the capital of the republic of Komi, which is 90 kilometers away.

Using computer models, experts at the Biological Institute of Komi predictthat 60% of the emissions from the landfill will be carried by prevailing winds to Syktyvkar.

The peat bogs on which the landfill is being built, coupled with the draining of the surrounding soil and the clearing of forests for the landfill, present an added danger, according to activists. 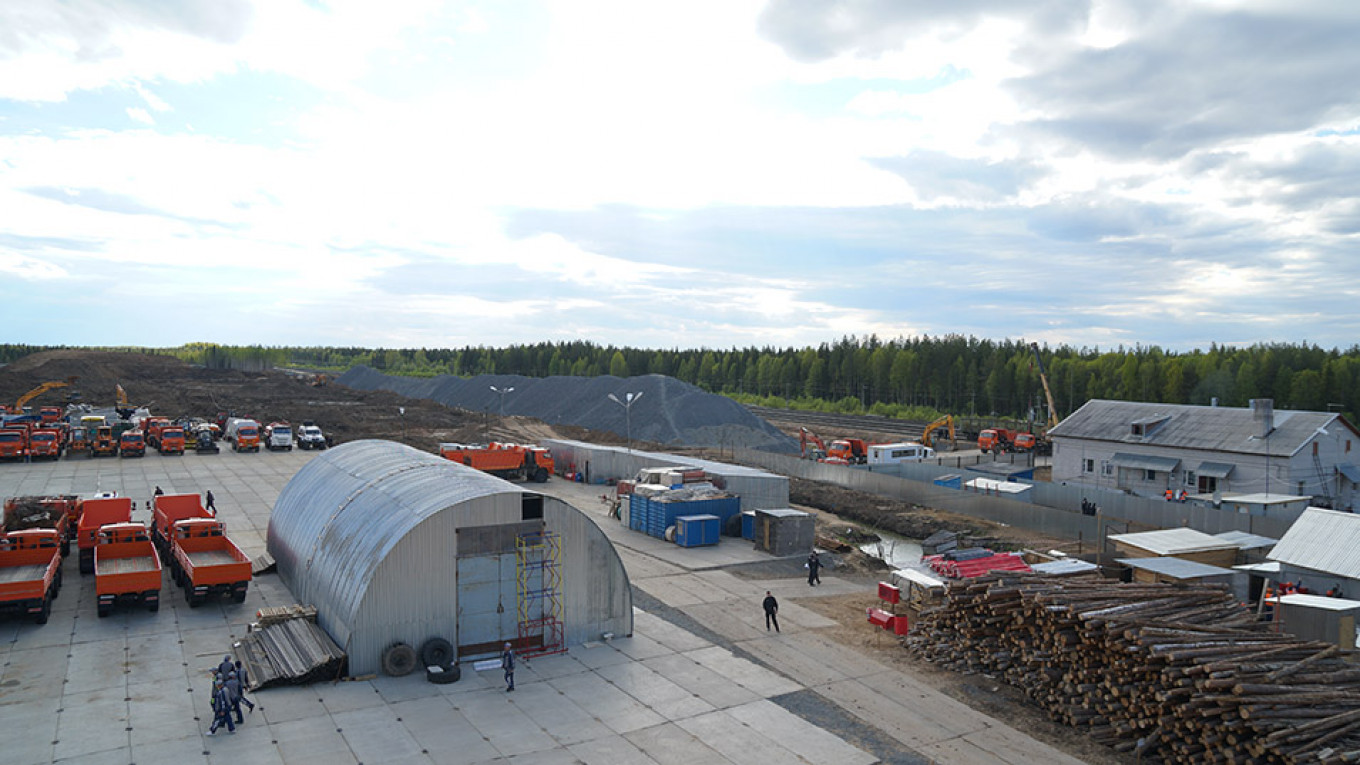 “We shouldn’t forget that seven Gazprom gas pipelines and an oil pipeline lie only 800 meters away from Shiyes, so if a fire breaks out, part of the republic will simply be blown away,” Ananina said.

Information about the dangers of the landfill has been circulating on social media, where opponents call it “The Dump of Death.”

State media outlets have largely ignored covering the landfill, while local authorities only publicly spoke about it in August 2018, when a local official travelled to Urdoma to meet with concerned residents.

“He told us they were not building a landfill at Shiyes, but a woodworking plant and a facility for sorting garbage, and that it would bring new jobs,” local resident Nikolai Viktorov said.

Meanwhile, a document appeared online in April that detailed plans to dump 2.3 million tons of garbage per year in Shiyes at the new landfill, which would span 3,000 hectares — the equivalent of 150 ordinary landfills — making it the largest in Europe.

When asked to comment on the controversial plan in May, President Vladimir Putin gave an evasive answer. He said that Moscow should not be overrun by garbage, but also said it is necessary to take the opinion of locals into account regarding the landfill. A day before Putin’s comment, his administration announced that construction in Shiyes would be stopped and would only resume after public hearings. In fact, construction had already stopped at the site almost three months earlier.

It wasn’t Putin who halted the construction

On the evening of February 22, Urdoma resident Valery Dzyuba set out for Shiyes to deliver his usual care package of food and cigarettes to activists based near the site. He discovered that a four-meter-high steel fence had been set up around the area and that the security guards on duty would not let him pass. 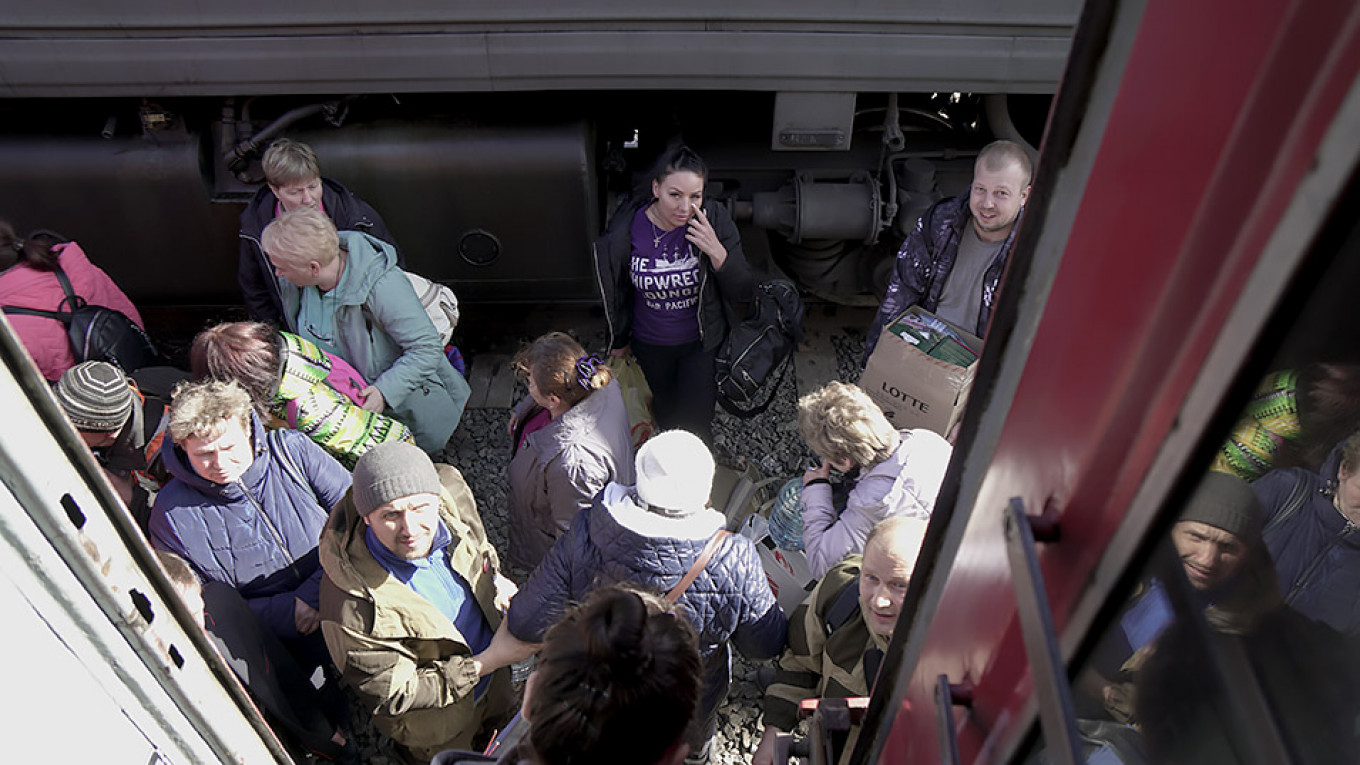 Back in December 2018, activists had installed a trailer equipped with a heating stove and a satellite dish for internet access near the construction site. Volunteers manned the trailer in pairs with each shift lasting one week. They monitored the construction process and submitted complaints to the police whenever they observed violations such as heavy caterpillar vehicles rolling over the railroad tracks. They immediately posted all of their observations online, garnering nationwide attention.

The activists said the fence was illegal: It stood on land that was not officially part of the construction site and partially passed through lands that belonged to Russia’s Timber Fund that had not been allotted to the landfill.

Dzyuba was able to get around the fence and made it to the trailer where he reported the incident by radio to Urdoma (cell phone coverage is almost non-existent in Shiyes). A dozen cars immediately left the village to help. After delivering more foodstuffs, the drivers turned around to go back and accidentally blocked the road for a gasoline truck that had been on its way to Shiyes. The truck driver eventually turned back and drove away.

“It’s too bad we didn’t think of closing the road sooner,” one of the activists said later. “We could have halted construction a long time ago.”

After turning the truck back, locals decided to organize two roadblocks with round-the-clock sentries. By March, protesters had set up army tents with camp stoves near the site to monitor the construction. On some days, as many as 250 tents could be seen at the site.

The nature of the protest

The protesters’ camp has everything needed for daily life, with one tent even functioning as a Russian sauna or “banya.” It is funded with donations, primarily crowdfunding. People from all over Russia visit the camp in groups and deliver food, money and other necessities. Money is even collected to pay the fines that have been levied against activists.

The authorities have clamped down on the protests by using traditional repressive methods, including beating, arresting and filing charges against demonstrators over violations of Russia’s law on protests, and even for online criticism.

Officials have already issued more than 70 fines totaling around 1.5 million rubles ($24,000) against protesters, as well as two criminal charges. Meanwhile, clashes with security guards and police have left many activists with serious injuries such as broken ribs and concussions, though no suspects have been identified in any of the cases. 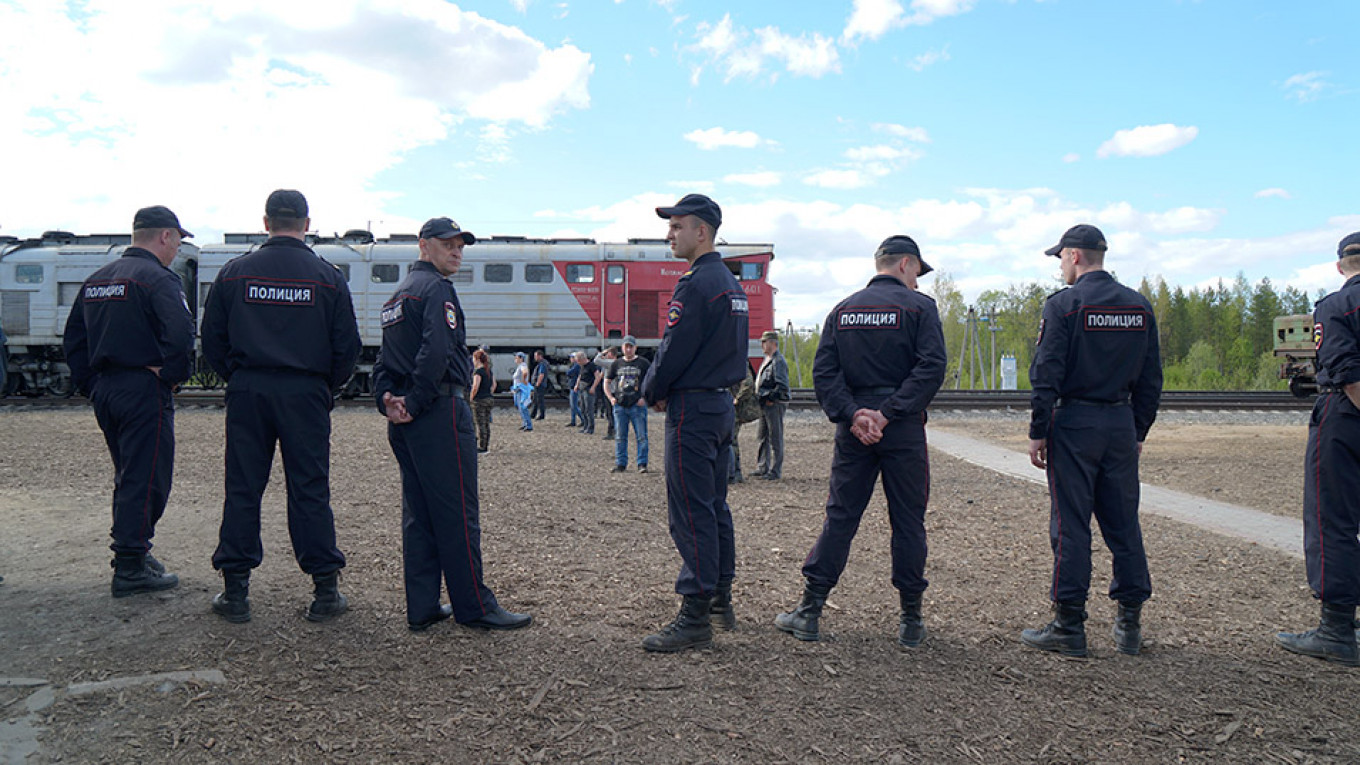 “I think most of the administrative charges were provoked by the police and private security guards themselves,” Ivanov told The Moscow Times. He says security guards have coordinated with police to organize clashes to gather video evidence to justify detentions.

The landfill protests have followed a logic that sets them apart from others in Russia. They began as a battle for survival, when locals took to the streets to protest the threat to their health and lives, rather than in an attempt to challenge the authorities. The demonstrations, however, rapidly became politicized, and protestors began to call for the resignations of their respective governors and an end to what they call the colonial policies of Moscow.

The activists do not have clearly defined leaders or a single center. Madmas, Urdoma, Yarensk, Kotlas, Syktyvkar and Arkhangelsk, as well as other regions and major cities like Moscow and St. Petersburg, have all seen protests and solidarity actions in support of the volunteers at Shiyes.

It is worth noting that the authorities have been limited in their ability to deploy large numbers of riot police or national guardsmen in Shiyes to clamp down on the protests, as the living quarters at the construction site can house no more than 200 people. The protesters, meanwhile, have numbered more than 600 at key flashpoints, including on June 20, when many feared a crackdown would accompany Putin’s annual call-in show.

Since then, the size of the protests has continued to grow, despite the summer months and the lull in the construction.

Activists say this is primarily because locals have a deep distrust of the authorities: Government promises to halt construction and repressive measures have largely backfired. The social media uproar over Shiyes has increased while state media has continued to stay silent on the subject. Even innocuous social media pages like “Moms of Syktyvkar” have begun to share announcements about protest rallies. 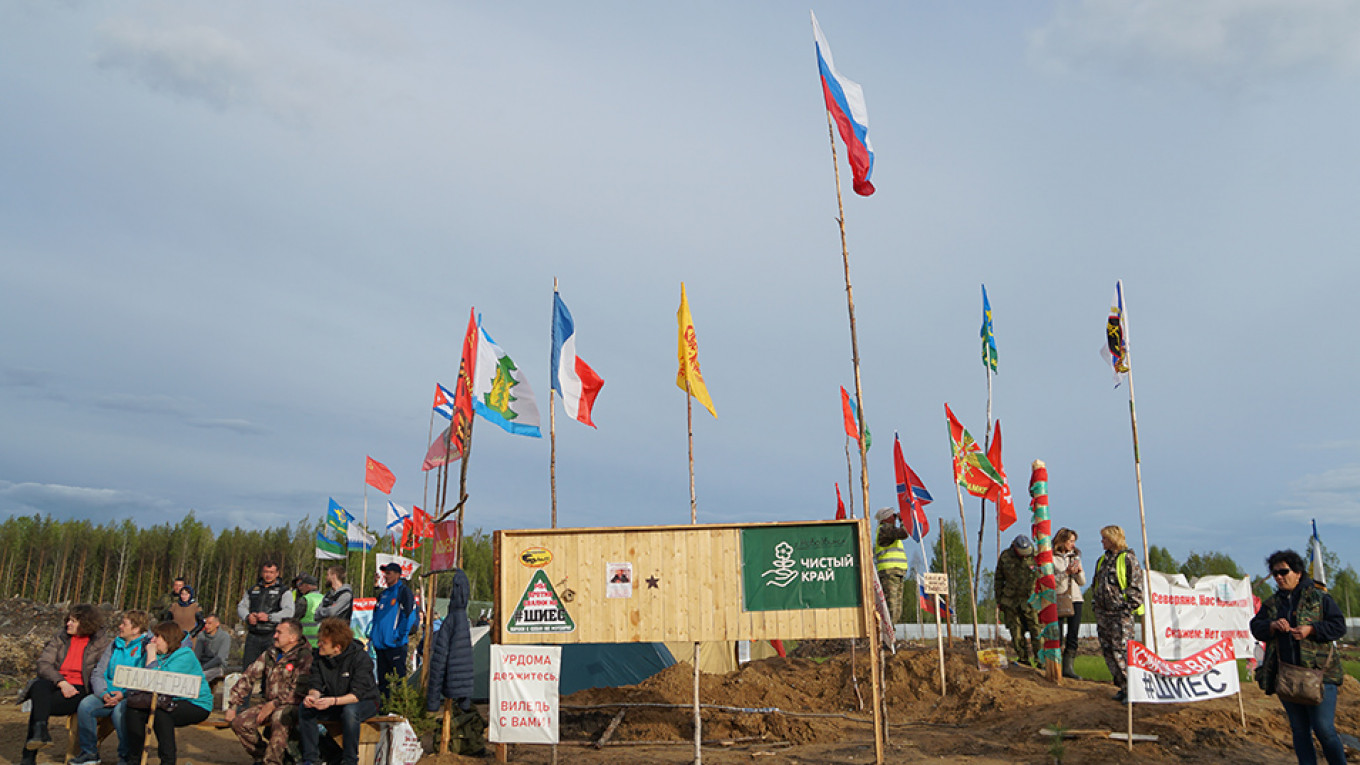 Additionally, journalists from Scandinavian countries that could be affected by Moscow’s garbage have arrived at Shiyes, along with reporters from France, Germany, and even Japan. The plan to build a landfill for Moscow’s garbage has long ceased to be a local issue, not least because the authorities plan to construct more such dumps in other regions as well.

Citizens are demanding that garbage be sorted and recycled and that the use of plastic be reduced nationwide. All these measures, however, will take time, while Moscow needs to dispose of years’ worth of accumulated garbage in the immediate future. Simply relocating trash is both faster and cheaper than implementing full-fledged reforms to garbage collection and disposal.

It is premature to speak about an end to the confrontation at Shiyes. Whether or not a landfill will ultimately be built there is still an open question, but it is already clear that a thriving civil society has begun to take shape around the issue.